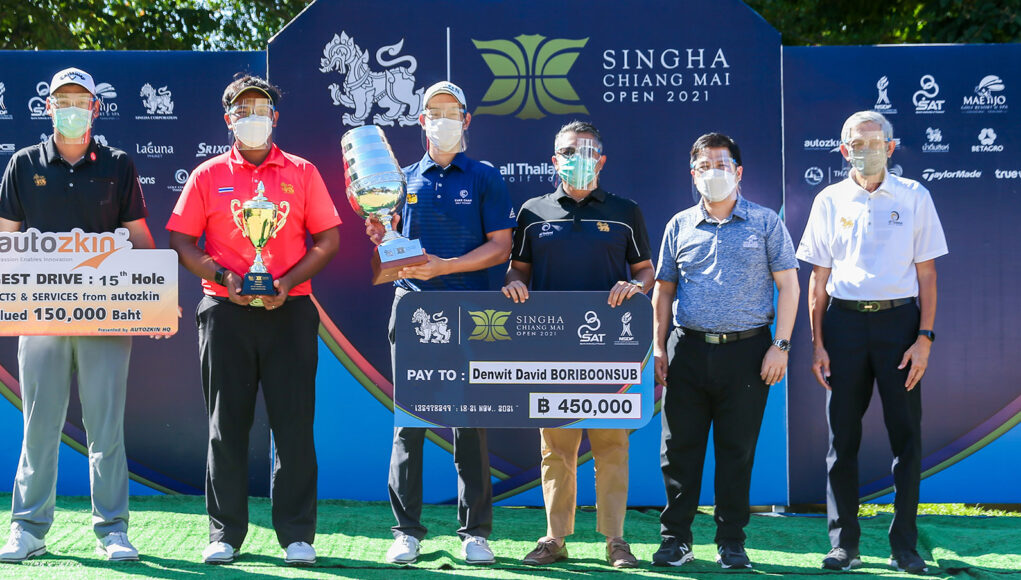 The 17-year-old from Rayong – who only turned pro 11 months ago – traded nine birdies with two bogeys for a closing 7-under to finish at 13-under at par-71 at Majejo Golf Resort and Spa, Chiangmai.

Sajawat Sriprasit (68) came in a shot further back in second, with American Barry Henson (70), who shared the 2-shot lead with Sajawat after three rounds, finishing third at 9-under.

Denwit, who was playing his 8th event on the All Thailand Golf Tour this year, collected the winner’s cheque of 450,000 baht and five world raking points. He moved up to 4th on the ATGT money list with 801,412 baht.

The former Thailand national golfer, who played one professional event on the Thai PGA tour did not expect a first title would come so fast.

“To be honest, my goal this event is to make a cut. To win is definitely beyond my expectations” said the youngster, who shared the lead in the first two rounds.

“I have learned a lot since turning pro but there is still a big room for improvement.”

Denwit hopes to build on his achievement when he plays two Asian tour events in Phuket later this month.

“It will give me a big boost for sure. I will be more confident in my game especially my putting”.

Meanwhile, Sajawat,25, paid tribute to Denwit for his great performance.

“He deserves to win because his putter is really hot today,” he said, adding he was satisfied with his performance, his best result on ATGT.

“Unlike previous rounds, my tee-shots were a bit poor. However, I have learned a lot today from my partner Henson.”

Settee Prakongvech, the two-time ATGT champion, finished fourth on 8-under following a closing 67.

Kamalas Namuangruk dropped a shot at 18th en-route to a 67 and a share of 5th with Kosuke Hamamoto (68).

Tunyapat Sukkoed shot a 1-under-par 70 to finish 8th on 5-under and secure the best amateur award.

The next and final leg of the All Thailand Golf Tour 2021 is the 22nd Singha Thailand Masters to be held at Santiburi Country Club, Chiang Rai on December 16-19.