SCOTTSDALE, Arizona: Kiradech Aphibarnrat makes his 2020 PGA TOUR debut with a sense of trepidation at the Waste Management Phoenix Open this week following a topsy-turvy 2018-19 Season.

The Thai star enjoyed three top-5s in the early portion of last season but an untimely knee injury slowed him down as he finished in 83rd place on the FedExCup points list. He also missed out on the International Team for the Presidents Cup which was a massive goal for him.

Kiradech’s world ranking has dropped to 120th this week – he started 2019 in 37th position – and with the Olympic Games looming this summer, the burly Thai knows he has a battle on his hands to qualify for Tokyo. He is the second highest ranked Thai after Jazz Janewattananond.

Utmost on his mind now is to ensure he is in good physical shape to compete. 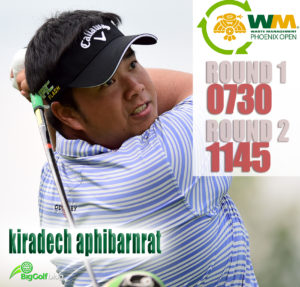 “I have to think my body is much better now but it’s still not 100%,” said Kiradech. “I’m looking for that one good week to bring my confidence back to normal. In the past few months, I’ve been working more in the gym and hopefully it’ll be better for me. I’ve been building the muscles around the knee and I think it’s going in the right direction.”

Kiradech hopes his second full year in the U.S. will be more rewarding. He believes he is more accustomed to the golf courses and requirements to excel against the world’s best players every week.

“I believe I can do better. I started well last year but I didn’t quite manage to play my best golf at all, which is partially due to my injury. I had a lot of missed cuts and I didn’t get used to some of the courses,” said Kiradech.

“My coach Mike (Walker) looks at my stats regularly and it was obvious my iron play was not as sharp as what I’m used to. The chipping and short game were not good too and there are a lot of things to improve, which I have been working on.”

Kiradech has featured in only one tournament during the fall season, finishing T8 at THE CJ CUP @ NINE BRIDGES in Korea and knows he has some catching up where he is presently ranked 147th on the FedExCup points list.

“I think I’m a bit nervous. I want to make my golf game more consistent and while I’ve played great golf over the last four to five years, I have struggled in the last six months. It doesn’t mean it’s the end of my career … I just have to rebuild my game, regain my confidence and have trust again.”

Kiradech suffered a partial tear in the anterior cruciate ligament (ACL) of his right knee during the Masters Tournament and subsequently played through the injury with several breaks in between tournaments. In hindsight, he felt it wasn’t the wisest decision.

“I’ve not played with an injury before and it cost me a lot,” reflected Kiradech.

“It’s time to prove what I can do. The top-10 in Korea was a good start and everyone knows I will play in many tournaments. I just need to bring my A-game out and choose the courses to my advantage. In the first two to three months, I will play in as many events as I can. I also aim to play in the smaller events and try to find my first win on TOUR which can make things a lot easier.”

During the break, he moved closer to the home of fellow Thai LPGA stars Ariya and Moriya Jutanugarn in Orlando, Florida which he believes will benefit him and wife, Tunyatorn. “I like it so far (in the U.S.). We’ve moved to the same compound as Ariya and Moriya and it feels more like home now. I wanted to be able to walk over to their house as they are like my sisters,” he said.

He will make his third appearance at the Waste Management Phoenix Open where he finished T67 in his debut in 2014 and T33 last year.