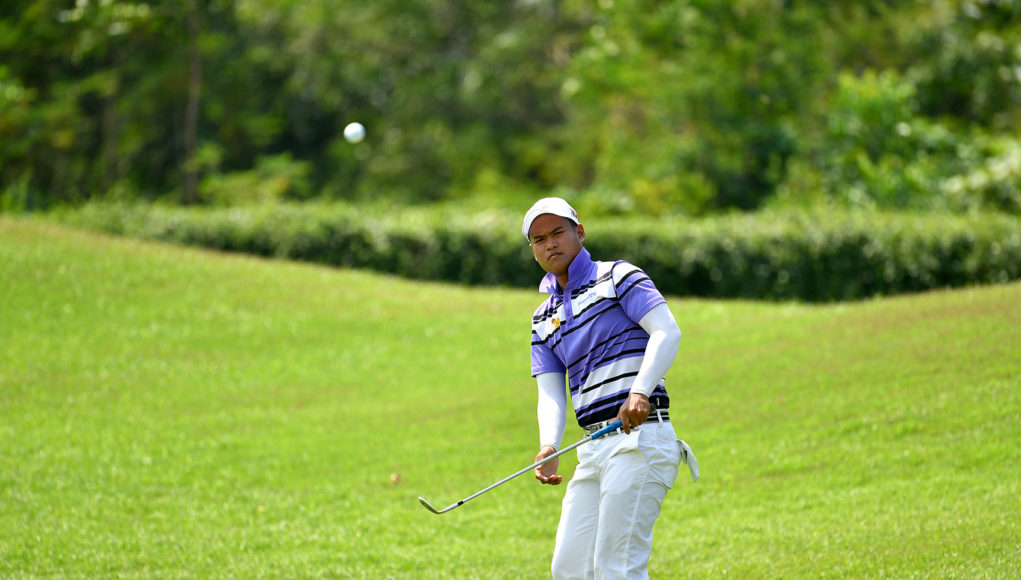 BANGKOK, Thailand: Young Thai amateur Natthaphat Harnchokchaiskul stole the show by opening his campaign with a solid seven-under-par 64 to grab a one-shot lead at the US$300,000 Thailand Open on Thursday.

The 19-year-old Natthaphat, one of the 10 amateurs in the field this week, received a late confirmation into the event on Sunday night but would find himself at the top of the leaderboard after firing eight birdies against a bogey at the Thai Country Club.

Starting from the first, Natthaphat reeled in four straight pars before nailing seven birdies in his next 11 holes. He stumbled with a bogey on 16 but bounced back swiftly with another birdie on 17 before closing with a par to take the lead for the first time in a professional tournament.

Phachara Khongwatmai impressed in his first attempt at tackling the course as he returned with a bogey-free round highlighted by six birdies to take second place at his National Open, which is co-sanctioned by the Asian Tour and the Thailand Golf Association.

Asian Tour Qualifying School graduate Aadil Bedi of India also kept the blemishes off his card to card a commendable 66 in his debut appearance at the Thailand Open. The 18-year-old shares third place with Thaya Limpipolpaibul of Thailand and Soomin Lee of Korea.

Singaporean veteran Mardan Mamat and American John Catlin, who hold a combined total of eight Asian Tour titles, were among those bunched in sixth place following matching rounds of 67s in the full-field event.

Defending champion Panuphol Pittayarat of Thailand had a round to forget after registering a 74 to sit in tied-110th place at the Thailand Open, which returned to the Thai Country Club for its third straight edition on the Asian Tour this week.

The Thailand Open marks the start of the Asian Tour’s 2019/20 Panasonic Swing, which is a ranking based on an aggregate point race that spans five events with the final top-three players chasing a share of a lucrative bonus pool.

– Natthaphat Harnchokchaiskul is a member of the Thai Golf Association. He is playing in his first Asian Tour event this week.

– He used to be a member of the Thailand Junior Golf Federation where he had won several Class A events before graduating two years ago.

– Natthaphat is one of the 10 local amateurs vying for honours in the Thailand Open this week. He is playing in his National Open for the first time.

– The 19-year-old Natthaphat found 10 fairways and missed only one green in his solid round of 64. He needed only 28 putts around the greens.

– Natthaphat, who hails from Bangkok, was the last man in for the 2019 Thailand Open. He only received his entry confirmation from the Thai Golf Association on Sunday night.

– Phachara Khongwatmai has claimed two top-10 finishes in Korea and Chinese Taipei to sit in 39th place on the Order of Merit. He is chasing for a breakthrough win on the Asian Tour this week.

– Phachara found 11 fairways and missed only five greens in his solid round of 65. He navigated his way around the greens in only 25 putts.

– Phachara came into prominence when he won the 2015 PGM CCM Rahman Putra Championship to become the youngest Asian Development Tour (ADT) winner at the age of 15.

– The 20-year-old Phachara finished in a career-high third place on the Asian Tour Merit standings in 2017, thanks to four top-five finishes which include three runner-up results.

– Bedi came through the Qualifying School in his first attempt and secured his Asian Tour card for 2019.

– Bedi claimed his first top-five finish on the Asian Tour on his home soil earlier in September. Sitting in 111th position on the Order of Merit, Bedi needs a solid result this week to boost his ranking. He has to finish inside top-60 on the money list to retain his card for the 2020 season.

– Bedi picked up the game when he was just four years old.

– Throughout his 13-year amateur career, Bedi has won 171 Medals and trophies. He has also represented India in all the Elite and Major Amateur matches of the world including Asian games, British Amateur, the Australian Masters of Amateur, Singapore Amateur and Eisenhower Cup, Ireland.

– Bedi represented India as an amateur at the 2018 Asian Games. He led the field for the first three days but eventually missed out on a podium finish on the final day, finishing in 13th place.

Poom surges into halfway lead alongside Natthaphat at Thailand Open