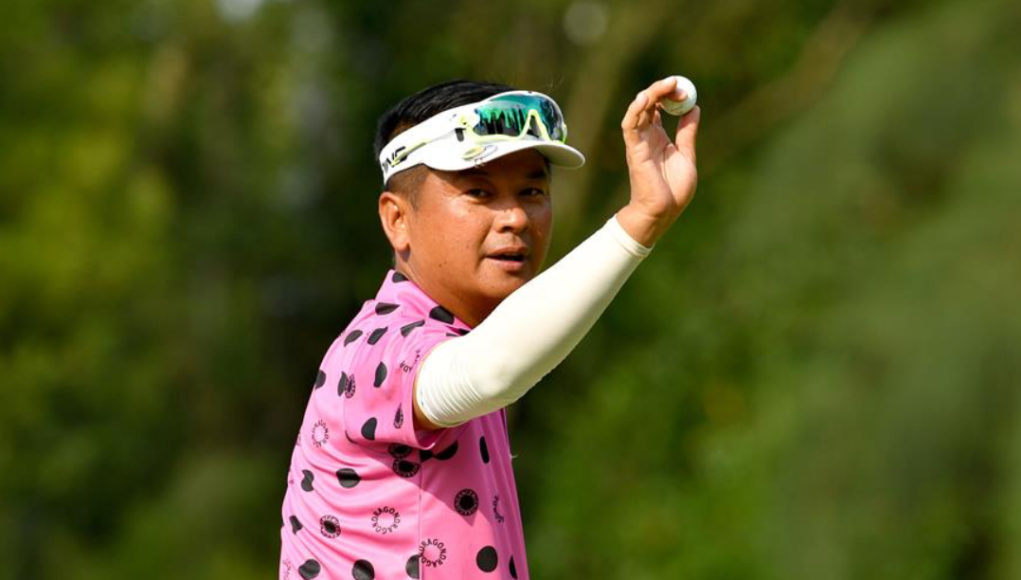 LINKOU, Chinese Taipei: Local hero Lin Wen-tang took flight with a birdie blitz before closing with a flawless seven-under-par 65 to grab the outright lead following the penultimate round of the Yeangder Tournament Players Championship (TPC) on Saturday.

Lin, who started the day two shots off the lead, raised the local cheers when he opened with five straight birdies before closing with two more birdies to take his place atop the leaderboard.

His three-day total of 16-under-par 200 would mark the lowest 54-hole score recorded in the tournament which has been played annually at the Linkou International Golf and Country Club since it was inaugurated in 2010.

Overnight co-leader Yikeun Chang of Korea extended his advantage to three after sinking his eighth birdie of the day to go to six-under, but a costly double-bogey resulting from an unlucky break on the last saw him sign for an eventual 68.

The 25-year-old Chang, chasing for his breakthrough win on the Asian Tour, trails Lin by one shot in second place alongside local hotshot Chan Shih-chang, who also returned with a 68, at the US$500,000 event, which is celebrating its 10th consecutive edition this week.

Promising rookie Kosuke Hamamoto of Thailand posted a flawless 68 to settle three shots off the pace in fourth while countryman Phachara Khongwatmai moved into fifth place on 204 after matching the lowest round of the day with Lin with his 65.

– Lin Wen-tang’s three-day total of 16-under-par 200 is the record lowest in the tournament, which has been held annually on the Asian Tour since 2010.

– The 45-year-old Lin has enjoyed three top-five finishes in the event in 2011, 2012 and 2016. He had uncharacteristically missed the halfway cuts in the last two editions. Lin has never missed a single edition since the tournament was inaugurated in 2010.

– The 45-year-old Lin claimed two top-10s last year. He came in tied-second at the Mercuries Taiwan Masters and finished tied-ninth at the Queen’s Cup 2018 hosted by Jaidee Foundation in Thailand.

– Chang stayed bogey-free for his first 40 holes before dropping his first shot of the week on the par-three fifth.

– Chang is chasing for his maiden win on the Asian Tour. He enjoyed runner-up finishes at the 2017 Yeangder Heritage tournament in Chinese Taipei, the 2018 GS Caltex Maekyung Open and the 2019 Bank BRI Indonesia Open last week.

– Chang’s result in Jakarta last week is his best result so far this season. He had carded a solid final round of eight-under-par 64 to finish second.

– Chang won twice on his domestic circuit in 2017, including his National Open, which earned him a coveted spot at The Open at Royal Birkdale, where he made his Major debut that year.

– He topped the Asian Tour Qualifying School in 2016 in his second attempt. He missed the mark in his first attempt in 2014. Chang, however, did not manage to keep his card for 2017 as he finished 101st on the 2016 Order of Merit.

– The 33-year-old Chan carded a flawless round of 64, highlighted by six opening birdies, in the second round to mark his personal best in the event where he had played annually since 2010. He came in tied-11th last year and his best result at the Yeangder TPC is a fourth-place finish in 2013.

– Chan enjoyed a breakout season on the ADT in 2014, when he became only the second player to win three titles in a single season on the secondary Tour. He earned playing rights on the Asian Tour for the remainder of that season after achieving the feat.

– Chan broke through on the Asian Tour at the 2016 King’s Cup in Thailand and went on to win his second title at the Diamond Cup in Japan two months later. He would end his season in a career-high fourth place on the 2016 Asian Tour Order of Merit.

– Chan claimed his six ADT title at the Taifong Open last year. He shares the record of having the most wins on the ADT with Pavit Tangkamolprasert of Thailand.

– Kosuke Hamamoto, whose father is Japanese and mother is Thai, is making his first appearance in the Yeangder TPC.

– The 20-year-old Thai has dropped only a single shot all week. He has stayed bogey-free for the last 34 holes.

– Hamamoto started playing golf at the age of eight. He is a former Thai Amateur star, South East Asia (SEA) Games individual gold medalist and was part of the first Thai team to win the Nomura Cup in Malaysia in 2017.

– He was also part of Team Thailand that finished second in the Team event at the SEA Games in 2017.

– Hamamoto came through 2019 Qualifying School last December. Starting with a missed cut in Bangladesh, he has since posted a tied-28th, tied-16th and tied-10th in Jakarta last week.
He has also posted six top 10s and 13 top-20s on the Asian Development Tour (ADT) and All Thailand Golf Tour (ATGT) in 2019.