Home ASIAN TOUR 2022 Singapore Open Sizzling 65 sends Sadom into share of the lead alongside Kim at... 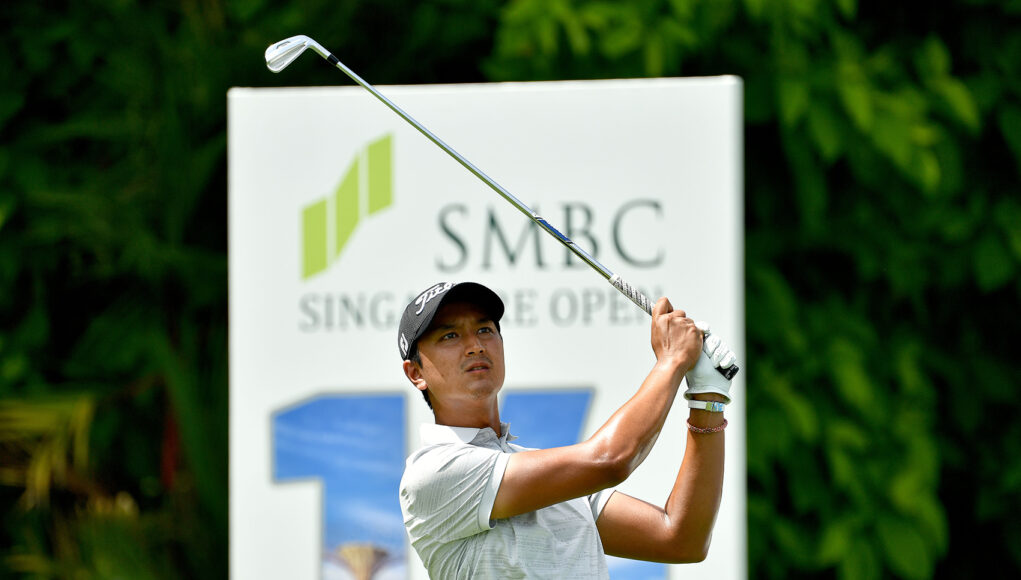 American Sihwan Kim stayed out in front after the third round of the US$1.25 million SMBC Singapore Open today at Sentosa Golf Club but was joined at the top by Sadom Kaewkanjana from Thailand.

Third-round leader Kim carded a two-under-par 69 on the Serapong Course while Sadom fired a 65 to lead on 11 under, in the final event of the 2020-21 season on the Asian Tour.

Joohyung Kim, the 19-year-old Korean who currently leads the Asian Tour Order of Merit, returned a 69 and is in solo possession of third, three strokes back.

Australian Zach Murray, in with 65, Justin De Los Santos from the Philippines and Japan’s Yuto Katsuragawa, who both scored 68, are a further shot behind.

Kim, who has spent much of his career playing on the Challenge Tour in Europe, is chasing his first win as a professional.

Said the Korean-American: “I feel alright, I wish I made more putts, but it is what it is and I’m still leading. I just couldn’t really get it close to the pin today, only had a couple of birdie chances and that was about it.”

The 33-year-old has finished in the top five six times on the Asian Tour and was joint fourth in the recent Blue Canyon Phuket Championship, at the end of last year.

“It is a very demanding course. I don’t know how the winds are going to be tomorrow, but I’ll just do what I did for the first three rounds,” added Kim, who claimed the US Junior Championship in 2004, before playing college golf at Stanford University.

Sadom has won once before on the Asian Tour, at the 2019 Bangabandhu Cup Golf Open –which saw him become the fastest Qualifying School graduate to win on Tour as it was his first start after graduating.

The 23 year old triumphed five times in Thailand last year, including in the Thailand Open, but a victory tomorrow would be far and away the biggest win of his career.

“I feel very happy. I made it bogey-free today and hit 16 greens, many chances to make birdie today, so I’m very happy today,” said Sadom.

“Tomorrow is the final day, and it’s not easy for me. A lot of pressure, but I will do my best.”

His 65 was the joint lowest round of the day and was flawless with six birdies and no dropped shots.

Joohyung Kim, despite being well place to win the Merit list and add Singapore’s National Open to his win in last week’s The Singapore International, was not happy with his round.

Said Kim: “I started really well at the front nine, it’s the back nine that I couldn’t do anything about it. To be honest with you, I was really disappointed with my back nine, felt that I should have stuck more in there, felt that I should have been mentally more there but made a few mistakes. The last hole I was able to redeem myself but I’m just not really confident over the ball and so got some work to do. I will still be in the final group tomorrow, so will give myself a chance tomorrow and work on it again.”

He got off to great start with an eagle on the par five fourth and went out in three under but dropped shots on 15 and 17 saw him slip back.

Thailand’s 14-year-old star Ratchanon Chantananuwat signed for a 72 and is one over, one ahead of England’s Paul Casey, who came in with a 71.

RT @asiantourgolf: Back in Japan 🇯🇵 for the first time in 3 years and Sadom Kaewkanjana 🇹🇭 is looking to recapture the eye-catching form th…
2
Joseph Warren🌹 @JosephLWarren11 1 hour ago
-- advertisement --